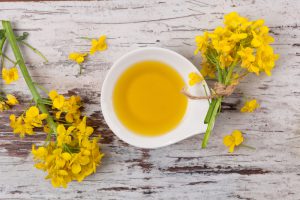 We get rapeseed oil from rape plant seed in successive technological processes which produce oil of different quality.

The first step in rape plant seed processing is the process of pressing. The process of pressing runs in screw-presses in one or several pressing stages. If it is multi-stage pressing then in the first stage the pressing is under low temperatures of about 40 °C. In this careful way we get crude rapeseed oil of a high quality containing all valuable substances. Mechanical ingredients of seed are removed from the oil by filtration. The result is crude oil product of the virgin type which is suitable for immediate use as food besides other things.

The other technology to get the crude oil is extraction. Extraction usually follows after the first stage of pressing when the marc is mixed with an extraction agent in which the oil is soluble. A common extraction agent is hexane. Hexane is removed from the extracted mixture by distillation. The product is extracted crude rapeseed oil and extracted groats. Extracted groats are a product for the feed mixture production. Crude oil is then treated by refining.

The next step of refining is oil bleaching which is usually carried out with the use of an absorption agent which collects pigments contained in oil on its surface. The absorption agent is removed from oil by filtration.

The final stage of oil refining is deodorisation which shall remove the substances that carry an undesirable smell and taste. This process of removing mainly volatile substances is carried out by steam in vacuum. The produced refined oil has usually a neutral taste and is usually clear.

Rapeseed oil according to the processing stage is used as follows: